For as long as I can remember, concert-going in Spokane has been an odd affair. There’s a constant battle between those who want to sit and those who want to stand and I’m always caught in the middle of it somehow. Check out the video above for my take on this, or if you like reading words, keep going.

I had the amazing opportunity on Sunday night to see one of my heroes live in concert for the first time: Mr. Robert Plant of Led Zeppelin. He played in Spokane and it was spectacular.

When I was a young kid and impressionable I was listening to what my friends listened to which meant I had a heavy rotation of TLC’s Crazy Sexy Cool, Creed and Ace of Base. My only saving grace and something I can proudly look back on was that I loved Aerosmith. This was in their new-found sobriety days, which we can all agree doesn’t compare to their early stuff. But Get a Grip led to Toys in the Attic and I’m ok with that.

But here I was living in the golden age of Pearl Jam, Soundgarden, Guns n Roses, and ultimately what became my all-time favorite band – The Black Crowes – and I’m wasting my eardrums on the revival of ska and Mambo #5?

But then my dad, I can only assume out of frustration of having to hear Ini Kamoze’s “Here Comes the Hotstepper” for the billionth time, gave me a cassette of Led Zeppelin II and it literally changed my life and set me on the path of musical righteousness that I still walk to this day. 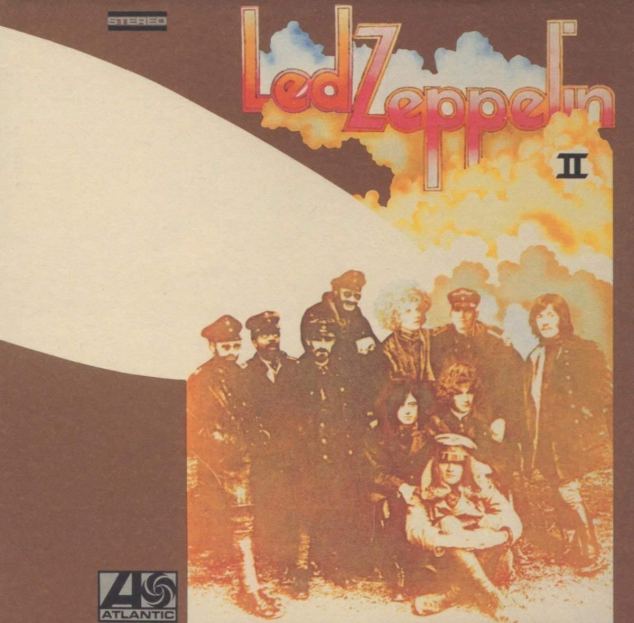 I taught myself to sing by trying to imitate Robert Plant! Which goes to show you can’t imitate perfection. The guy is a legend. A personal hero and for some reason, I’d never seen him live in concert.

But being a dad of three, money is extremely tight, so it would seem that I would have to miss Robert once again, which at 71 years old, is dangerous.

But when you’re a dad, you gotta either buy your kids diapers or go see Robert Plant. While I could and would deal with the consequences of maybe just letting the kids run free for a day or two to offset the costs, my wife… well she doesn’t exactly have as deep of appreciation for Robert as I have.

But then… a miracle! My friend Wayne, the drummer in the band I play in said he had an extra ticket and for the price of a drink or two it was mine!

Now I won’t get too much into the show itself, because it was Robert Plant! The guy was amazing! His voice is still perfection. He did Zeppelin, he did solo stuff, he did some Irish tune that sounded like the band on the sinking Titanic if the Titanic was a space ship. He said “Baby” a lot. You really don’t realize how much Robert says the word “Baby” – be it “Babe, I’m gonna leave you” or “Has anybody seen my baby?” (I spent a good three minutes straight up laughing after Robert kept asking the crowd if they had seen his baby and then pointing in different directions “Is my baby over there?… Did my baby go over there?” The repetitive question and conviction that he repeatedly ask it conjured up images that this man was looking for his actual baby and it made me laugh. A lot.).

But I loved every waking moment of the show, with the exception of one thing, and this is typical of Spokane: The crowd.

Now don’t get me wrong, I love Spokane I’ve lived in Spokane my entire life, but when it comes to concerts, we’re kinda lame. There’s always a battle within the crowd of “Do we sit? Or do we stand?” And more often than not, this is a battle that always takes place right next to me. I’m not sure why, but I’m a magnet for this drama.

I’ve drawn a diagram to illustrate my point. 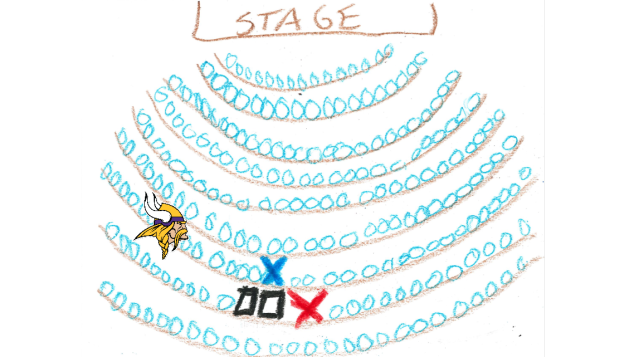 I’m represented by the red x. I’m sitting down because that’s what everyone else is doing. I’d sure love to be standing up shaking it, but all of the blue circles represent people sitting down, with the exception of the big blue x in the row in front of me to my left. That woman is standing up. She’s having fun. She’s dancing. She’s doing what you’re supposed to do at a rock n roll show.

The squares next to me represent the two people who are sitting behind this woman and don’t appreciate her obstructing their view of Robert. They are yelling at her to sit down. She’s not budging, putting her husband or boyfriend or “What did I just get myself into first date” in an uncomfortable spot, but he remains seated while she gets the brunt of the squares next to me.

I’m all for the lady standing up and dancing. That’s what you should do when you’re watching one of the greatest singers to ever walk the planet.

“You’re not watching a movie!” is what Chris Robinson of The Black Crowes told the Spokane crowd when they came to town and played The Fox Theater in 2001. People got up after that.

I was sitting during Robert Plant because I didn’t feel like having people yelling at me, and in true Spokane fashion, the majority of the crowd made it clear that they would like to remain seated for this awesome show.

Perhaps the median age had something to do with it? The older crowd doesn’t want to stand. But I beg you to think: What would you have done if you were watching Led Zeppelin in the 70s and someone told you to sit down, huh?

How quickly rebellious youth gives way to “my feet hurt. I wanna sit down.” Cory from 10 years ago wouldn’t understand the plight of the feet aching crowd, but these days, while I don’t agree with it, I’m understanding it more.

But back to the chart:

Eventually, as the evening went on, and more and more familiar tunes were played (and drinks were consumed), a lot of people did stand up and began to have a good time, as indicated by the multitude of blue x’s. 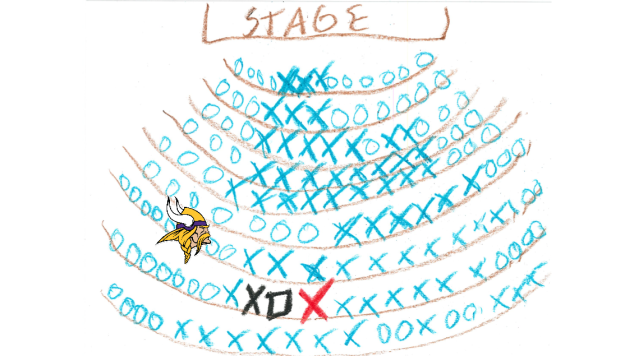 My long-winded point to all of this is: How can Spokane get over their “Should we sit or  Should we stand” at a concert dilemma?

Is this just a Spokane thing? I’ve been to many shows outside of Spokane and haven’t noticed this going on.
Does it depend on the venue? If there are chairs should you sit? Or is it as simple as you paid for the seat, you should be able to stand if you’d like?

I’ve seen so many fights break out at concerts because someone rocking out is blocking the view of someone who would rather sit back and watch.

What is the solution?

To sit or to stand? That is the question.

A trip to the Spokane County Interstate Fair ended in tragedy for me recently when I entrusted the safety of my precious corn dog in the hands of my 2-year-old son.

What happened was 100% my fault, but quickly reminded me of my place in the pecking order of my family. However, it totally felt worth it to reenact the events of that day.

Look, the real estate market right now is pretty cut-throat. My wife and I put an offer in on a house earlier this year and despite some very lucrative incentives, our offer was rejected (though did garner some interest from Bill Belichick. See YouTube video below).

It’s so competitive, I’d recommend not overlooking the value of buying a haunted house. Yeah, you have to put up with a few little problems (nightmares, demons, inexplicable scratches covering your arms, full-on possession), but when compared to paying the inflated prices of today’s market, there’s a lot of value to be found in a haunted house.

And I think I found the perfect one:

I took a few weeks off to welcome my new twin boys to my family!

My first son already came pre-loaded with a tribute to Bruce Willis with Hudson Hawk and a nod to the WWE’s Triple H with his full name being Hudson Hawk Howard. So I knew my twin boys needed equally awesome names to keep pace with HHH.

And after a lot of convincing to my wife, I think I nailed it with gracing them with names honoring one of the greatest duos in movie history.

It’s been two glorious years since my wife and I welcomed our first child, Hudson Hawk Howard (HHH), into the world and it’s been a wild ride. I love him so much and being a dad has been the most rewarding thing I’ve ever done in my life.

So when my wife came to me nine months ago and said: “let’s have another one.” I immediately replied, “One? How about two! At the same time! Let’s go!”

Fast forward 9 months and here we are. Ready to welcome two new babies into the world and into our family.

But we don’t know what their names are. Yet.

Time for another Coffee With Cory Baby Naming Challenge!

Also, buy our yet-to-be-released rap album that will never come out. That’s what’s really important. Details in this video.

I decided to throw together some of my favorite moments from the past few months from my Coffee With Cory segments, my Extreme Science hosting and my Lunch Break anchoring.

Hope you enjoy it!

A grocery store in Vancouver, B.C. is trying to get customers to not use plastic bags by offering up plastic bags that might not make you many friends on the bus.

Here are the bags, along with a few suggestions to make reusable bags a little more fun.

The bottlecap challenge is trendy and cool on the internet right now. So I’m here to make it not trendy and cool. Because that’s what I do. Here you go. See how hard I trained for this one segment that one viewer called ‘A bunch of dribble’ and ‘a punch of junk’.

Also, Pro Tip: Remember “righty tighty, lefty loosey.” I spent far too much time kicking this lid and not realizing I was simply tightening it.

Here’s the training montage by itself.

“With every shot, show a little improvement, to show it won’t take too long… that’s called a montage! Montage!”

Magic has always fascinated me. I love it. Don’t know how it’s done, but I love it and will always jump at the opportunity to see some magic performed.

So when mentalist, magician, and entertainer Paul Draper stopped by the studios and asked if he could do some magic for us, I said, “You get in here and do magic now!”

Paul was in Spokane because he put on a free show for the kids at Camp Stix and was just hours away from leaving Spokane and heading to London to perform over there, but not before he performed some jaw-dropping tricks (“illusions, Michael”) for Grace and I on Lunch Break.