Holy cow. It’s been almost two months since I wrote something original on here. Don’t want to break that record just yet, so here’s a 4 year old Facebook memory that still has value and merit a far as I’m concerned about Back the Future III. It’s important. It needs to be talked about.

Back to the Future III.

At the very end, Marty goes back to 1985. He arrives on the train tracks.

As he rolls by slowly at the crossing, there are at least four cars full of people that see him. Then, a second later a train comes and destroys the DeLorean. 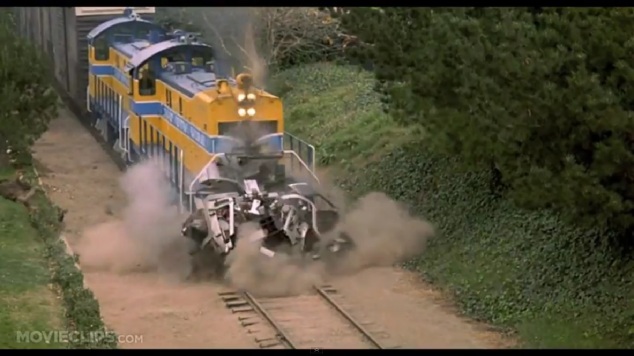 Again, At least four cars full of people witness this, along with the train driver. Surely the train driver knows he just obliterated a car that potentially had at least one person inside, yet he keeps on going! The scumbag was probably drunk. I don’t know where he thinks he’s running to. Surely police will know where to find a train right? Because all of those people in the cars that just saw this train vs. vehicle called the police right?

So the, Marty leaves the scene of the train crash, WALKS to his house, which has to be at least a 20 minute hike. Then when he finally gets there he gets in his truck and drives over to Jennifer’s.

Add on another 20 minutes.

Then, after waking up Jennifer and getting her inside the truck, he begins to drive over to the crash site.

While en route to the crash site, Needles pulls up next Marty at a red light in his red 1970’s Ford pickup. Now Needles pulls up with two dudes drinking beer in the bed of the truck and some punk sitting next him, BLASTING Huey Lewis! Keep in mind Needles looks like a hardcore 1980’s punk rocker with his green skull shirt, leather jacket, greased up filthy hair and a cocaine stare. Yet he’s driving around cranking HUEY LEWIS like he’s some sort of bad ass! Real cool Needles! You gonna go loiter around the arcade later you badass? 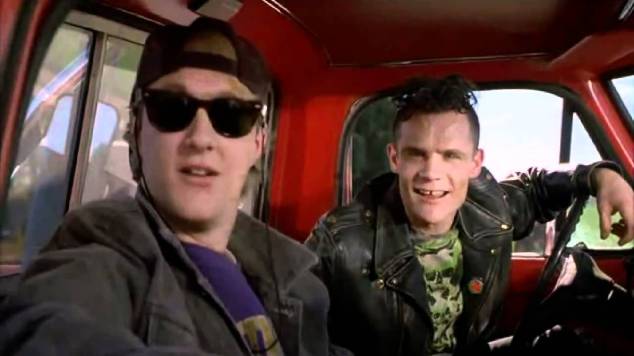 Your tough guy street cred is blown when you drive around with a John Cusack wannabe as a passenger cranking Huey Lewis, Needles. Sweet truck, though.

So, after Needles narrowly avoids colliding with a Rolls Royce and sending the two unstrapped passengers in the bed flying though the air after a T-bone collision and eventually smashing into the pavement at 60 miles per hour, killing them both and ensuring that Needles will spend the rest of his life taking it in jail (At least 2 counts of vehicular homicide, possibly more depending on his passenger and the Rolls Royce victims), Marty takes Jennifer to the crash site.

This HAS to be about an hour after the collision! WHAT? The police never showed up. None of those four cars OR the scumbag train engineer reported the collision?

If police were aware it, certainly they would’ve responded within an hour, and if they had, surely they would still be on scene investigating, right? NO! All of the debris from the crash still sits there! LIKE IT NEVER HAPPENED! 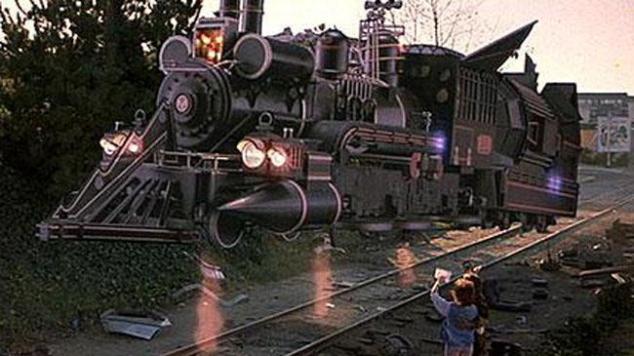 Hey, a giant flying train just arrived. No one take any pictures or get back on the phone with the police with an update to that horrible train vs. car collision you already reported! “Yeah, 9-1-1? Me again. Remember the train that hit the car about an hour ago I called about? Well, bit of an update if you’re interested… ummm… a flying train just appeared out of nowhere.” BTW… notice all the debris scattered about? No one has even investigated this yet.

THEN, a time machine train loudly appears on the tracks out of nowhere, sits there and talks to Marty and Jennifer for at least 5 minutes and NO ONE in the three story apartments or the little boxes on the hill side in the background bothers to take a picture or again call the cops? Especially as they are FLYING away? A FLYING TRAIN that made a deafening entrance five minutes ago? NOPE!

But that is not even the WORST thing.

After three movies, A TRILOGY, of Back to the Futures and Doc Brown telling Marty not to take a piss in the wrong place or it will mess up the whole future, in the end Jennifer tells him she has this fax from the future but because Marty didn’t get in a wreck, it erased itself! 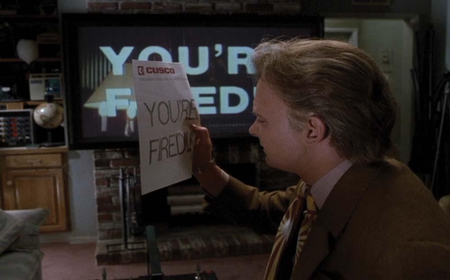 First of all, the fucking thing should’ve vanished, because if Marty never hit the car, that means he’s not the guy who always has to do what people want him to because he can’t stand being a referred to as a chicken or yellow! So, he would’ve never been sent a “You’re fired!!!” fax in the first place because he wouldn’t have scanned his card and told Needles, ‘I’m in!” So, he NEVER would’ve been fired. The fax should’ve disappeared. 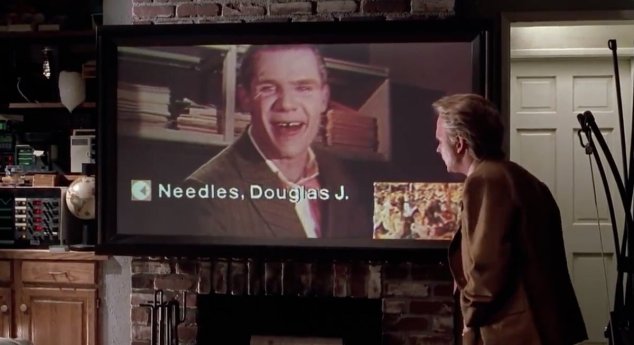 But again, after three movies of Doc telling Marty that he can’t even wipe a booger on a wall or it might cause a chain reaction which would mean the difference between your parents being successful and playing tennis in the morning, or smoking and drinking vodka while celebrating your brother’s parole, he tells Jennifer that the “you’re fired” fax means that “The future isn’t written. No one’s is!” 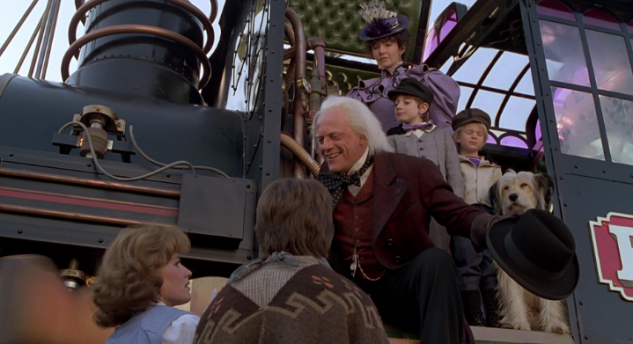 So what? Doc gets a little strange from Clara Clayton and now all the sudden he’s foot loose and fancy free?

Some corny after school “make the most of your life” advice?

It means your future husband isn’t a reactionary douchebag and is now able to keep his job because he doesn’t give in to peer pressure. 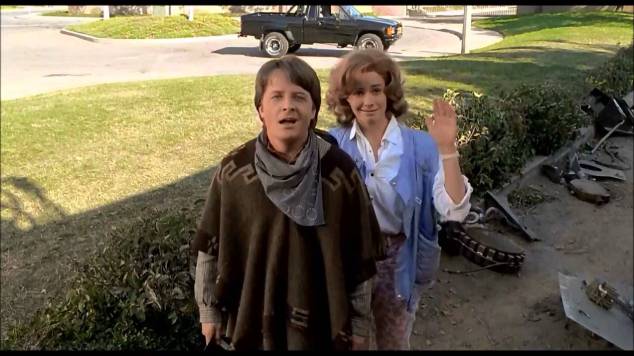 Jennifer: “Thanks for nothing, Doc. Now please leave my impressionable, trusting teenage boyfriend alone you old kook and go back in time with your magic train.”

It’s like I want to believe, but I just can’t. Too many holes in the plot. It’s like they just rushed the filming of this movie and didn’t even care. And this was the just tail-end of the movie that I caught! I still love the movies though. Ok, got to stop now. Striking Distance staring Bruce Willis is on. 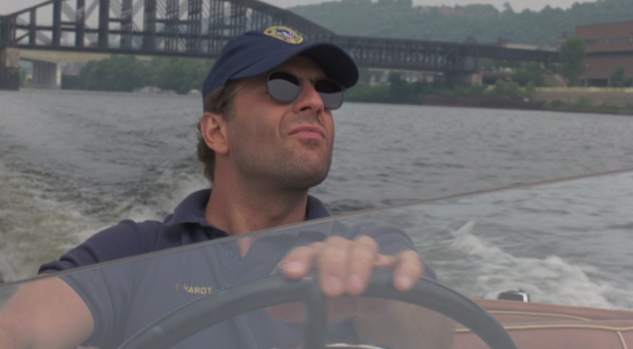